The Rise of Halal Cosmetics in Indonesia

Indonesia’s cosmetics sector performed strongly throughout 2017 in line with the country’s growing middle class and increasingly affluent consumers. The implementation of halal regulations for cosmetics in Indonesia has proven to be a game changer with halal cosmetics now starting to dominate cosmetic sales in the country. Wardah, the country’s first halal cosmetic manufacturer, has successfully capitalised on the new trend and has become a leading cosmetics brand in Indonesia.

Challenges still remain with stiff competition from global brands as well as the market being flooded with fake and illegal cosmetics. 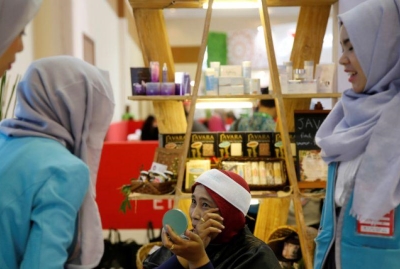 Indonesia’s cosmetics and toiletries industry recorded a remarkable growth of 11.99% in 2017 with a total sales value of 19 trillion IDR. This is higher than the industry’s average annual growth rate in the last six years of around 10%. The same holds true for cosmetic product exports which also grew by an average of 3.56% in the last five years.

As of September 2017, Indonesia’s National Agency of Drug and Food Control (BPOM RI) reported that there were 33,823 registered cosmetic products sold in the country. This is an increase of 11.57% compared to the same period during the previous year. The market size of Indonesia’s cosmetics industry in 2017 reached 46.4 trillion IDR, up from 36 trillion IDR from the previous year (See Overview of Indonesian Cosmetic Sector: Growing Domestic and Export Markets).

Martina Berto, the owner of the Sariayu Martha Tilaar brand, for instance, only recorded a slight increase in revenue in 2017. Until Q3 2017, the company generated revenues of 505.02 billion IDR, up 3% compared to that of the previous year with 490.31 billion IDR. Cosmetic products accounted for 91% or 459.94 billion IDR of total sales.

Lower sales were also reported by leading cosmetic manufacturer, Mustika Ratu, whose sales declined by 8.8% in Q3 2017 from 259.96 billion IDR in the previous year to 236.17 billion IDR.

Halal cosmetics on the rise

In recent years, there has been a growing trend in the use of halal cosmetics in Indonesia. This is in line with the increased number of middle class and affluent Muslim women who are halal conscious in their purchases (See Indonesia Aiming to be the Islamic Fashion Capital by 2020).

This segment of Indonesian women feels that it is their religious duty to wear Islamic clothing and cosmetics. According to a survey, 58% of women in Indonesia now prefer to use halal cosmetics. They place a greater emphasis on halal certification over price, packaging, organic ingredients and other trends. The implementation of the Indonesian government regulation on halal product assurance as a derivative regulation of Law No. 34/2014 on Halal Product Assurance in 2017 has further increased demand for halal cosmetics (See Halal Implementing Regulations – Where are They at Now?).

Since then, Wardah has consistently recorded 20%-50% annual sales increase, which is disproportionately higher than that of other manufacturers at around 10%. The company’s monthly sales value in 2014 reached 200 billion IDR, significantly above its two largest local competitors, Martha Tilaar and Mustika Ratu, which recorded an annual sales value of around 400 – 600 billion IDR.

Wardah’s growing dominance in the domestic cosmetic market can also be seen from the increase in the number of its products which received top brand awards from one in 2014 to ten in 2015.

The success of Wardah has attracted its competitors to follow in its footstep. Zoya, a prominent hijab producer, recently introduced its halal-certified cosmetic line. Martha Tilaar, L’Oreal and Unilever have also obtained halal certification for many of their products in order to tap into this growing market segment.

Despite various promotional and marketing efforts by domestic manufacturers in the last few years, global brands and imported products still dominate cosmetic sales in Indonesia. It is difficult to break the dominance of global brands as cosmetic products typically have specific target customers and customers tend to be loyal to a particular brand. They cannot easily switch to other products even if these products are of equal or better quality.

The Flooding of Fake and Illegal Cosmetics

One of the legal loopholes used by importers to import counterfeit and illegal cosmetic products is the Regulation of Head of BPOM No. 13 of 2015 which exempts imported cosmetic products from compulsory verification.

With its population is expected to reach 270 million in 2020, the prospects for the cosmetic industry in Southeast Asia’s largest economy is still very bright for the coming years. The Ministry of Industry forecasts that the value of the Indonesian cosmetic industry will soon reach 100 trillion IDR from the current 46.4 trillion IDR.

In 2018, Indonesian cosmetics and toiletries exports are targeted to reach 1.67 billion USD and are expected to increase to 1.81 billion USD in 2019.

Euromonitor International also predicts that Indonesia along with Vietnam will become the fastest growing cosmetics market in Asia. Indonesia will make it to the top 10 markets for global beauty and skin care products by 2019, worth over 130 billion USD globally.

Halal regulations have brought about new opportunities for the cosmetics industry in Indonesia. Besides giving local cosmetic manufacturers a competitive edge over global brands in the domestic market, halal-certified local cosmetic companies can also grow their market share in overseas markets too.

What Is #MYCYBERSALE & How It Can Benefit You